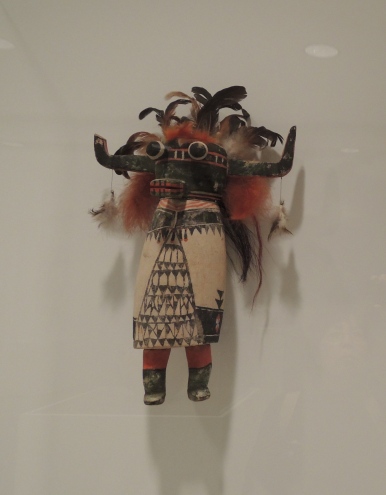 The Museum of Fine Arts, Houston

Kachina dolls represent spiritual beings called kachinas, and Sio Shalako is a kachina believed to bring rain. A tall, shoulderless figure, he wears clothing made from rows of eagle feathers. He has large, prominent eyes, a green face, and horns.

Kachinas are supernatural beings who embody the spirits of living things, inanimate objects, and ancestors who have become a part of nature. They can be male or female, and they represent aspects of the natural world: clouds, animals, plants, human qualities, and even death.

Native Americans of the Southwest United States believe that kachinas come to live amongst them from late December until July. During this time, ceremonies take place in which men of the pueblo dress and perform dances as incarnations of the spirits.

Kachina “dolls” are not playthings. They are carved-and-painted figures that represent the kachinas. The men give them to women and children. The dolls are hung in homes, where they bring blessings upon the household and teach children about the different spirits. Carved from cottonwood or pine, kachina dolls play an important role in the Hopi and Zuni religions.(information/MFAH’s  website)